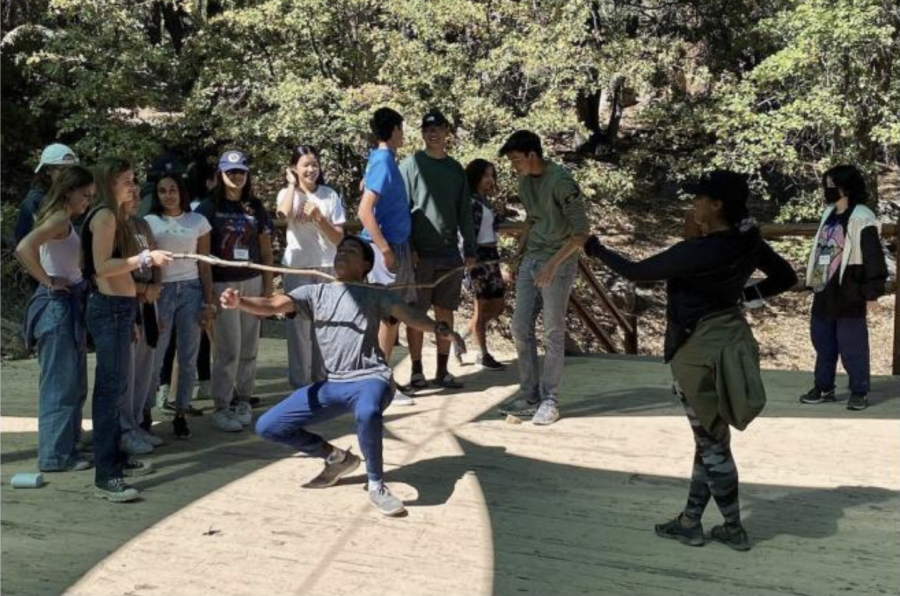 The sophomore play limbo at retreat.

In a time of uncertainty, the 9th and 10th grade retreat brought a sense of normalcy to the Sage Hill community. Despite difficulties caused by the ongoing COVID-19 pandemic, this year’s freshman and sophomore retreat, held at Cedar Lake Camp on Sept. 13-15, was a success. Ninth graders were able to experience a traditional freshman retreat, while 10th grade students were finally able to make up for their missed freshman retreat after it was cancelled last fall.

Organizing this complicated trip was not an easy task for teachers and administrators. The school began preparing this event as early as last school year so that sophomores would be able to finally experience their freshman retreat.

Ninth Grade Dean Mrs. Elizabeth Anauld explained the school’s decision for including 10th graders in the retreat: “The planning started May of last year. We recognized that it is such an integral part to getting a class connected and creating community, so having not had that at the beginning of the year, it was evident that [sophomores] didn’t know one another.”

Planning a retreat for two grades instead of one brought additional logistical challenges, with administrators having to consider each individual’s situation. “The capacity of the camp is 360, and we had, I think, 331 people who were attending,” said Mrs. Anauld. However, the staff at Cedar Lake Camp were able to accommodate the larger group. “The camp was amazing, and they actually brought in bunk beds so that the capacity per room was 8, rather than the normal 6.”

Mrs. Anauld also described the extensive measures the school went through to make this trip possible while COVID cases were still rising. “Obviously, we needed to make sure that everyone was safe, so we had to double-check vaccination,” said Mrs. Anauld. In addition, the school had to increase testing in the weeks before and after the retreat.

At Cedar Lake Camp, students were able to participate in activities such as high-ropes, hiking, canoeing, and crafting. The camp’s amphitheater was also a great space for students from both grades to enjoy events like talent show performances and ninth grade advisory banner presentations together. The Monday night talent show, in particular, was a favorite, as students were able to showcase their skills in singing, gymnastics, acting, and stand-up comedy. Freshman and sophomores also were able to take a break from school work and relax during free time and bonding activities with their advisories.

Even though they had only started attending Sage a few weeks prior to the trip, the freshmen class enjoyed themselves during this highly anticipated event. Freshmen took this outing as an opportunity to connect and bond with their classmates.

“I wasn’t too sure going into it, but it was beautiful, we went hiking a lot, and I made a lot of friends on the retreat,” Melody Yu said. “Overall, it was a great experience I wish we could do every year.”

Freshman Noah Jimenez notes the many new experiences that took place during the trip, explaining that the retreat “gave us the opportunity to connect with our classmates over new activities, failures, and memories.”

Sophomores were also excited for the trip, especially after missing out on their freshman retreat last fall.

“I was pretty bummed,” said Carisa Koh. However, she ultimately enjoyed the experience, stating, “It was better than I expected and allowed me to try new things.”

Students also faced unexpected challenges, particularly towards the end of the trip, when  sophomores were unable to head home on schedule due to a shortage of buses. However, students responded to this setback well and made the most of the situation by passing the time with friends by playing cards or video games. “It was certainly very interesting,” sophomore Kevin Hu said. “We had to wait an additional four hours, but we made it work at the camp and rested well on the bus.”

Even through a year of adversities, overcoming the difficulties that came up along the way made the retreat all the more memorable for those who took part in the unique experience. As Mrs. Anauld explained, “the beautiful thing about retreat is that people get to know others that they wouldn’t have and you get out of your comfort zone.”