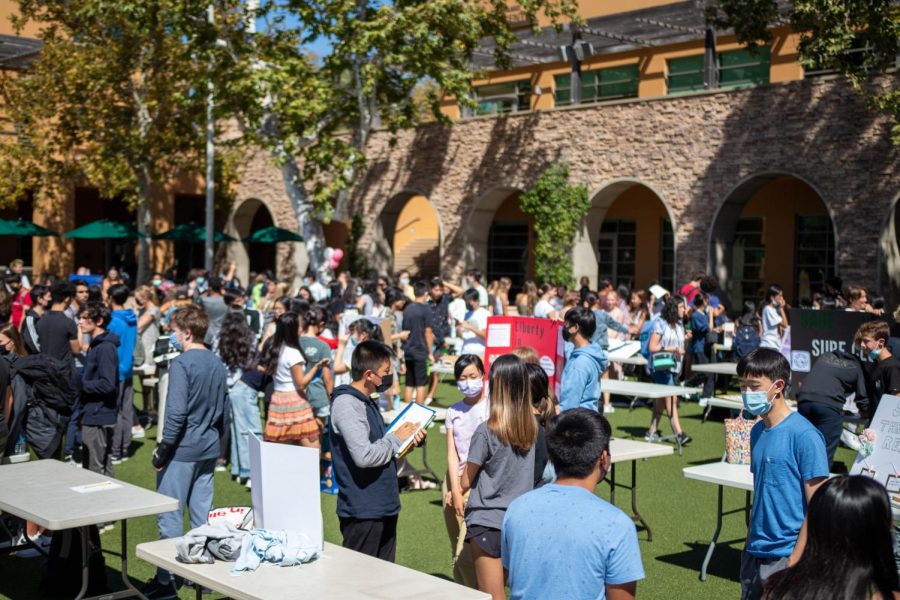 Students gather in Town Square as dozens of clubs advertise themselves.

The campus’s reopening at the beginning of the school year has brought back the tradition of in-person club fairs, where representatives from student-led clubs set up their tables at Wilkin’s Town Square to welcome prospective club members. Students could circle the tables to sign themselves up for as many clubs and organizations as they were interested in. There was no shortage of clubs to choose from—the event featured more than fifty returning and new student-led clubs.

Many Sage students are excited for this opportunity to start and join clubs, especially now that club meetings are held in-person.

“Clubs are a great way for us to interact with fellow students of similar interests,” said junior Linqian Fu.

By starting or joining a club, students can also pursue their passions or learn something new.

“I wish to create a space for everyone to share their outlooks on different perspectives of life and inspire each other,” said sophomore Rong Bao, the founder of the new Philo-Chocolate Society, where chocolate lovers come together to participate in semi-formal discussions on topics in philosophy while eating chocolate.

Besides the Philo-Chocolate Society, Sage Hill students have also founded several other new clubs this year, including the DND club, Moxie, the Fabulous Foodies, Aquaponics club, Financial Management club, the Civil Engagement and Political Involvement Club, the Visual Media Club, Meet in the Middle, OCCares, Sage Hill Psychology club, Teen’s Hunger Alliance, ASTAR, the Sage Hill Medical Club, and the Student Advisory Club, as well as the Discovery and Diction club. The resumption of in-person learning has seen the revival of the Sage Hill Surf Club and Film Club as well.

If students missed the Club Fair in September, they can still check out the list of student-led clubs, which Mr. Campeau sent out by EMail to contact the leaders of any clubs they are interested in.