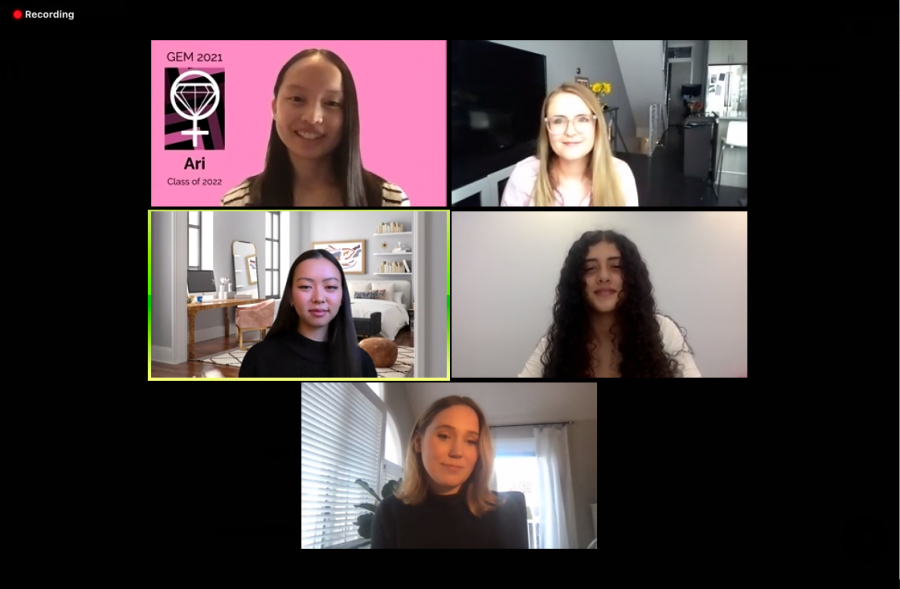 Junior Ari Rednour played a key role in setting up the career panel and dedicated a lot of time to communicating with the panelists and coordinating this virtual event.

“The planning for our event started in the fall, when we went around discussing what contacts we know. Then we started generating ideas of what we could do with those contacts, which led to us organizing a career panel,” Rednour said.

“One girl after the panel said she wanted to be like Grace one day and go into media or a similar creative field, which really made me see the impact that our event has on these girls,” Rednour said. “Our panel showed middle school girls that they could be in any field that they want to when they grow up.”

The three speakers covered important topics such as their journeys to find their careers and passions as well as the barriers that they had to overcome.

“With this whole year being virtual we were able to have 43 attendees, which was really amazing that we could have this turnout. Just knowing that many girls were interested in our event and having all of the panelists speak on their experiences was a success in itself,” Rednour said.

After the career panel, the girls engaged in an activity with the organization Science Scoop, led by Junior Isabel Gomez and her friend Lexi Howell.

“Our program, Science Scoop, goes around to various afterschool programs and girl scout groups and we do workshops with them. We teach them about one of our five areas of science which are animals, chemistry, nature medicine, and technology,” Gomez said. “For this GEM event we picked the technology category. Using Scratch website, a coding platform designed for kids, the girls were able to make their own game.”

Science Scoop has partnered with GEMfest in the past and strives to continue sparking middle schooler’s interests in science through interactive activities during their workshops.

“Hopefully this inspires them to use the Scratch website some more in the future and to continue learning about coding and how cool it is. I also hope they were inspired by women in STEM in general,” Gomez said.