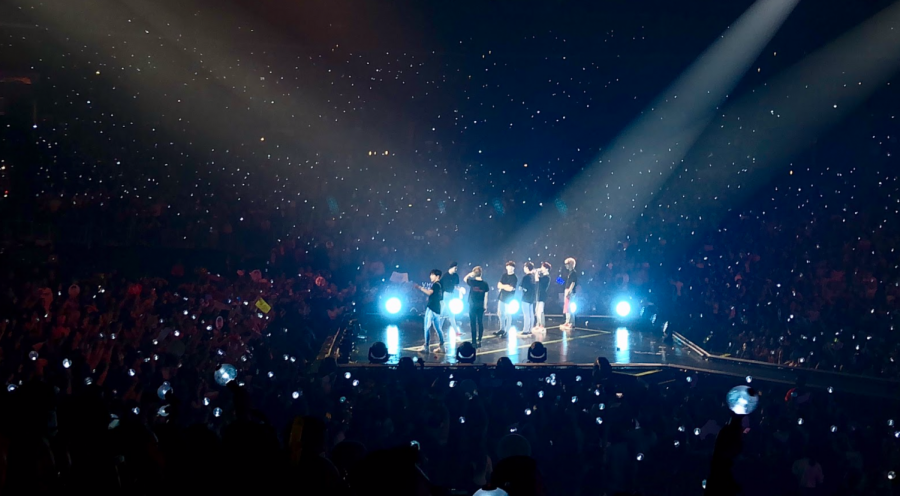 Being a global phenomenon and the biggest boy band in the world topping Billboard Charts, selling over 4 million albums and appearing on many American talk shows and numerous award events, BTS (Beyond the Scene), consisting of seven talented members, RM, Jin, Suga, J-Hope, Jimin, V and Jungkook took over 2018.

They have been recognized by many famous and popular Western artists and other American celebrities through their successful achievements. Tickets for their Love Yourself world tour outsold in under minutes!

In 2018, BTS held one of their concerts in September in Los Angeles at the Staples Center. Each of the members’ performances were incredible and, because the concert consisted of lyrical Korean and Kor-english songs, the audience could better understand how they incorporate certain moves depending on the words used throughout the piece. The art of their performances was truly eye opening. There were so many fans of different races, genders, and ages in attendance, which showed a very diverse range of love and support from their fan club called the ARMY (Adorable Representative MC for Youth).

Also in 2018, BTS attended the Youth 2030 United Nations conference, which occurred at the General Assembly in New York on September 24, 2018. RM, who is the leader of BTS, offered a truly meaningful and powerful speech discussing the need “to ensure that every young person is in education, learning, training or employment by 2030” (unicef.org) and to “speak yourself” (unicef.org) in partnership with a global initiative called Generation Unlimited. This was a major step into their “Love Myself” campaign launched with UNICEF, as they were able to share their message to the audience.

Throughout 2018, BTS appeared in many talk shows including “The Ellen DeGeneres Show”,  “The Tonight Show with Jimmy Fallon”, “Good Morning America”, and “The Graham Norton Show”. During their interviews, all members were so full of life and engaged with their fans and audience members. Included with their appearances, they performed some of their hit songs such as “Fake Love” and “Idol”, which helped raise their popularity.

Lastly in 2018, BTS received many prestigious awards and trophies both in America and Korea. The group was nominated in many categories in American award events such as the American Music Awards, Billboard Music Awards, Radio Disney Music Awards, People’s Choice Awards, iHeartRadio Music Awards and have in fact, won all possible awards, along with their best fan category.

Most importantly, South Korea’s President Moon Jae-in also recognized BTS for their huge international success by tweeting, “Congratulations to the Seven Music-loving Boys and Their Wings, ‘ARMY’! The songs, dance, dreams and enthusiasm of BTS energized and gave strength to young people around the world.”

BTS has achieved global success in 2018 and will continue to grow as Korean pop artists and superstars throughout the coming years.